Opposition to the Stage 3 Tax Cuts

Despite us going through a major cost of living crisis, despite chronic underfunding of our crucial public services, despite all the economists who say it's a bad idea, the Labor government is still holding fast to their plan to hand more than $254 billion to the wealthiest people in the country. I’m fighting to stop this grossly regressive change. 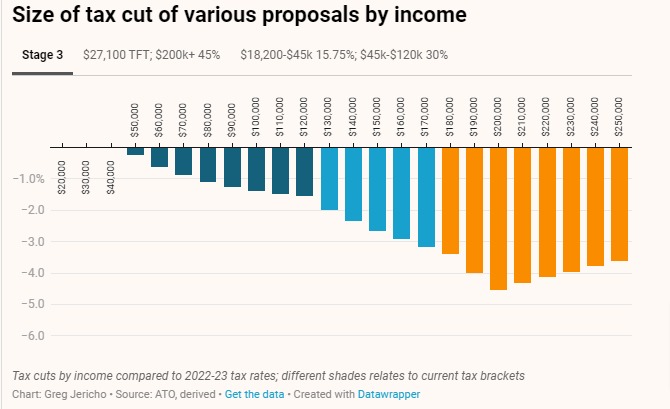 Labor voted for the cuts while in opposition, and promised during the 2022 federal election that they would stick to the cuts – despite strong opposition from economists, anti-poverty advocates and some of their MPs.

The Greens voted against the cuts in 2019, and we’ve consistently pointed out that these cuts will only serve to turbocharge inequality.

The top 10% of income earners will receive about 52.7% of the benefits of these cuts. CEOs like Qantas’ Alan Joyce, already one of the highest paid people in Australia, will get $9000 extra a year, while people on minimum wage get nothing.

Indeed, the Centre for Future Work has shown the stage 3 tax cuts leave everyone earning less than $97,000 per year worse off once the low-middle income tax offset is also wound up.

Everyone would be better served if we stop the cuts, and instead use the money to fund universal services that benefit everyone, like bringing dental and mental health into Medicare, introducing universal free childcare, and building 100,000s of affordable and public homes (a quarter of a trillion dollars would easily do all that!).

What good is an extra $9000 to someone on $210,000 when there’s an increase in crime in their area because there’s a spike in poverty?

What good is that tax cut when kids end up trapped in poverty and our society loses the opportunity to develop our amazing talents to the fullest?

What good is that extra money when the government doesn’t invest in reducing emissions and building infrastructure to prepare us for climate change?

Australia was once known as The Land of the Fair Go, and most Australians understand that a more equal society benefits everyone. The Labor government would do well to remember that.

In November 2022 I moved that the House of Representatives call on the government to stop the stage 3 tax cuts.

My motion did not succeed: Labor voted with the LNP against the motion. Read the Transcript